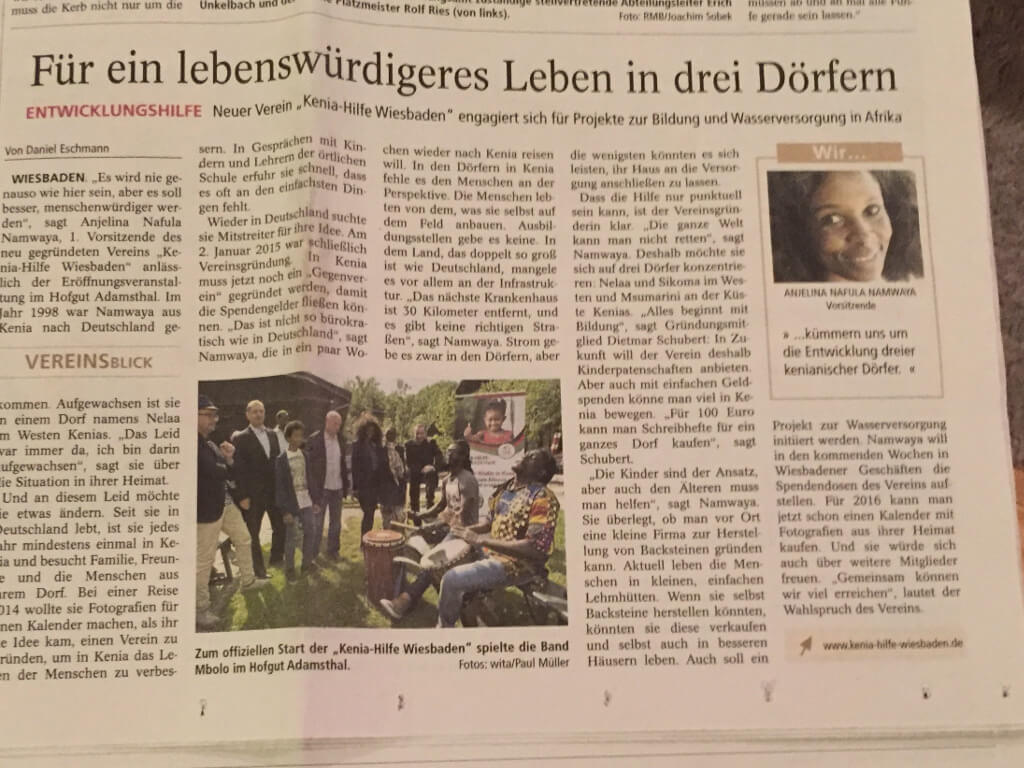 New Organization 12.05.2015
NEW CLUB “KENYA HELP WIESBADEN” WANT TO IMPROVE LIFE SITUATION IN THREE KENYAN VILLAGES
The band Mbolo played in the Hofgut Adamsthal for the official start of “Kenya-Hilfe Wiesbaden”.
Photos: wita / Paul Müller
By Daniel Eschmann
WIESBADEN – “It will never be the same as here, but it will be better, more humane,” says Anjelina Nafula Namwaya, first chairperson of the newly founded “Kenya-Hilfe Wiesbaden” association at the opening ceremony in the Hofgut Adamsthal. In 1998 Namwaya came from Kenya to Germany. She grew up in a village called Nelaa in western Kenya. “The suffering was always there, I grew up in it,” she says about the situation in her home country.
And she wants to change something about this suffering. Since she lives in Germany, she is at least once a year in Kenya, visiting family, friends and people from her village. In a journey in 2014, she wanted to make photographs for a calendar when she came up with the idea of ??setting up an organization to improve the lives of people in Kenya. In conversations with children and teachers at the local school, she quickly learned that it often lacks the simplest things.
Again in Germany, she quickly started looking for comrade for her ideas. On January 2, 2015 was finally founded. In Kenya, a “counterparty” has to be established, so that the donations can flow. “This is not as bureaucratic as in Germany,” says Namwaya, who wants to return to Kenya in a few weeks. In the villages in Kenya people are lacking in perspective. People lived on what they cultivate in the field. There were no training posts. In the country, which is almost twice as large as Germany, there is a lack of infrastructure. “The nearest hospital is 30 kilometers away, and there are no proper roads,” says Namwaya. There is electricity in the villages, but the few could afford to have their house connected to the supply.

The founder of the organization is clear that aid can only be selective. “The whole world can not be saved,” says Namwaya. That is why she wants to focus on three villages: Nelaa and Sikoma in the west and Msumarini on the coast of Kenya. “Everything starts with education,” says founding member Dietmar Schubert: In the future the organization wants to offer child sponsorships. But even with simple money donations you can move a lot in Kenya. “100 euros can help children in the village,” says Schubert.
“The children are the approach, but the elderly must be helped too,” says Namwaya. She wonders if you can set up a small company for the manufacture of bricks on site. Currently people live in small, simple mud huts. If they could make their own bricks, they could sell them and even live in better houses. A water supply project is also to be initiated. Namwaya wants to set up in the coming weeks in Wiesbaden’s shops the donationboxes of the organization. For 2016 one can already buy a calendar with photographs from their homeland. And she would also look forward to more members. “Together we can achieve a lot” is the motto of the association.

BEFORE YOU START INFORMING YOURSELF ABOUT OUR WORK
In order to optimize and continuously improve the website for you, we will use cookies to customize and improve the content shown to you, ensuring you get the best online information and shopping experience. By clicking “Accept All Cookies”, we can continue to deliver personalized offers and inspiration, based on the things you like. If you prefer, you can continue with “Only Required Cookies”. But, keep in mind that blocking some types of cookies may impact how we can deliver tailored content that you might like.
If you want to learn more about cookies and why we use them, visit our Cookies Policy page

This website uses cookies to improve your experience while you navigate through the website. Out of these, the cookies that are categorized as necessary are stored on your browser as they are essential for the working of basic functionalities of the website. We also use third-party cookies that help us analyze and understand how you use this website. These cookies will be stored in your browser only with your consent. You also have the option to opt-out of these cookies. But opting out of some of these cookies may affect your browsing experience.
Necessary Always Enabled
Necessary cookies are absolutely essential for the website to function properly. These cookies ensure basic functionalities and security features of the website, anonymously.
Functional
Functional cookies help to perform certain functionalities like sharing the content of the website on social media platforms, collect feedbacks, and other third-party features.
Performance
Performance cookies are used to understand and analyze the key performance indexes of the website which helps in delivering a better user experience for the visitors.
Analytics
Analytical cookies are used to understand how visitors interact with the website. These cookies help provide information on metrics the number of visitors, bounce rate, traffic source, etc.
Advertisement
Advertisement cookies are used to provide visitors with relevant ads and marketing campaigns. These cookies track visitors across websites and collect information to provide customized ads.
Others
Other uncategorized cookies are those that are being analyzed and have not been classified into a category as yet.
SAVE & ACCEPT